Palestine solidarity activists are facing harsh censorship, repression and retribution on at least two US campuses during Israeli Apartheid Week.

In the most alarming case, officials atNortheastern University in Boston, have banned a branch of Students for Justice in Palestine (SJP), launched police investigations into students and threatened two of them with expulsion for distributing leaflets on campus.

At Barnard College in New York, administrators have removed an authorized banner expressing solidarity with Palestine.

Israeli Apartheid Week is an international series of on-campus events, designed to draw attention to Israel’s crimes against the Palestinian people.

On 7 March, members of Northeastern University’s SJP were informed that their organization had been suspended until at least 2015 and student members have been permanently banned from holding positions in recognized student organizations unless they undergo what amounts to university-supervised re-education.

Members of Northeastern SJP are calling on their peers across the country to stand in solidarity with them as they face what appears to be the most serious attack on students advocating for Palestinian rights since the Irvine 11 trial.

“As if banning our activities from campus and denying us all use of campus resources wasn’t outrageous enough, the university is pursuing expulsion-level sanctions for two students — all for participation in a mock eviction action,” Northeastern SJP says in a statement.

The two students targeted for possible expulsion “happen to be the only women of color in the Northeastern SJP chapter,” Max Blumenthal reports at Mondoweiss today.

The Northeastern SJP action alert urges concerned members of the public to sign a petition to “Reinstate SJP and drop all charges against its members.”

It urges the public to contact university officials directly, including the president Joseph Aoun, and requests organizations to send letters of solidarity to Northeastern SJP.

As Blumenthal reports, the students received a letter from Jason Campbell-Foster, director of the school’s Center for Student Involvement, that “offered a litany of charges against the students.”

The main accusation related to the SJP’s 24 February distribution of mock eviction notices across campus.

Mock eviction notices are leaflets that students have distributed on a number of campuses to raise awareness about Israel’s systematic demolitions of Palestinians homes.

This image of the leaflet was tweeted by Northeastern SJP: 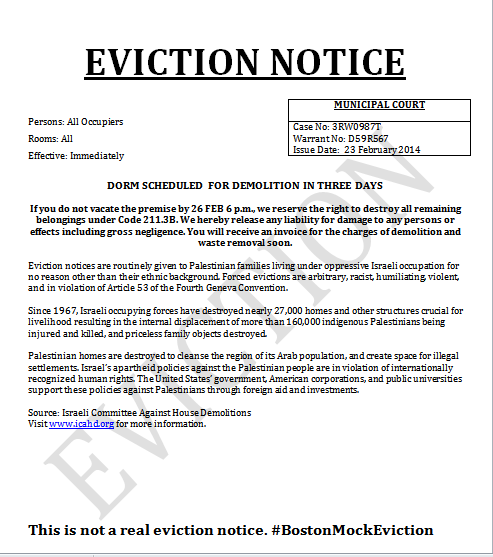 In both cases, university administrators investigated and found no evidence to support the accusations that Jewish students were targeted.

But Campbell-Foster’s letter to Northeastern SJP states: “You have not shown a concerted effort to improve your practices and educate your members on how to properly operate your organization within the boundaries of university policy.”

Northeastern SJP has long been the target of university sanctions and harassment over members’ free speech and advocacy for Palestinian rights.

Max Geller, a second-year law student, told The Electronic Intifada last year how he had received death threats over his advocacy work as a member of SJP.

Blumenthal reports that the day after the mock eviction notices, Robert Jose, Northeastern’s associate dean of students, sent a campus-wide email stating: “We do not condone any behavior that causes members of our community to feel targeted and/or intimidated.”

“Jose urged students to express ‘how this has impacted [them]’ by contacting school administrators and the Hillel House of Northeastern, an explicitly pro-Israel Jewish communal organization committed to countering SJP-related activism,” Blumenthal adds.

Geller told Blumenthal that campus police summoned students for investigation and visited students in their dorms. According to Geller, the first Northeastern SJP members to be visited by police were Muslim and Arab.

A statement on the Northeastern Hillel website condemns the mock eviction notices and confirms that the “administration is working with the Northeastern University Police Department to conduct a thorough investigation.”

Blumenthal’s must-read report details how the suspension of Northeastern SJP is “the culmination of a long-running campaign against the group led by powerful pro-Israel outfits based in Boston.”

At Barnard College on 11 March, university administrators removed a banner with the words “Stand for Justice in Palestine,” pictured above, that had been placed by Columbia SJP.

Barnard College is a sibling school to Columbia University.

“The banner was placed after members of [Columbia SJP] went through the required bureaucratic channels and processes in order to give voice and presence to our week-­long events as part of Israeli Apartheid Week,” Columbia SJP explains on its website.

The statement says that the banner was “taken down by the administration of Barnard College after they caved to pressure from other groups. Barnard administration offered no explanation, and no warning that they planned to remove our banner.”

The fact that our banner has been taken down now is a direct violation of our freedom of expression. The removal of our banner this morning has left members of Columbia SJP, Palestinian students on campus and other students that are often marginalized and silenced, feeling that Barnard College does not follow its own anti-­discrimination policies. We are alarmed to know that “Palestine” and “justice” are not acceptable in Barnard’s educational space and that certain voices are discriminated against by the College.

Barnard Dean Avis Hinkson said in a statement Tuesday afternoon that it has been a long-standing policy to allow student groups to hang banners outside Barnard Hall promoting their events. But Hinkson acknowledged the concern about placing SJP’s banner next to Barnard’s, and promised a re-examination of the banner policies.

The campus pro-Israel group LionPAC “said that the removal of the banner was necessary to prevent confusion over Barnard’s position on the Israeli-Palestinian conflict,” according to the Spectator.

As I write in The Battle for Justice in Palestine, Project Interchange has brought thousands of influential figures, including many top US police officials, on propaganda tours designed to increase participants’ sympathy with Israeli policies.

In 2012, Barnard was the target of a bogus complaint by Zionist groups under Title VI of the US Civil Rights Act that a Jewish student faced discrimination. The US Department of Education dismissed the complaint.

The administration’s latest surrender to such bogus claims and campaigns provides yet another disturbing example how of basic free speech rights and academic freedom are being sacrificed in order to protect Israel from criticism and to suppress solidarity for Palestinian rights.

One thought on “Palestine solidarity group banned at Northeastern, students threatened with expulsion”